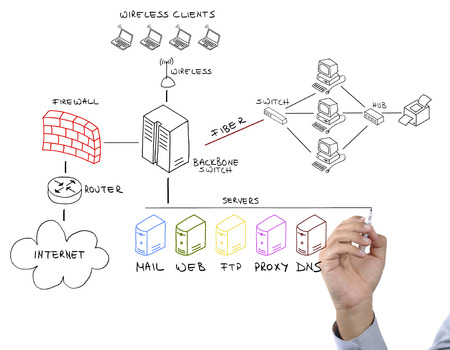 The Importance of Technology in Spotting Security Risks

What risks should users consider when using public WiFi networks with regards to their security and privacy?

Are an essential part of any modern day computer network, providing protection from malicious users, viruses, and hackers. A firewall is a specialized hardware device or software program designed to filter and protect a computer network from unwanted access. Firewalls act as a barrier between a trusted internal network and an untrusted external network, such as the Internet.

Having a network firewall in place is essential for any business or organization that stores and processes sensitive data. Firewalls act as a first line of defense against malicious activities. They can be configured to monitor and analyze incoming and outgoing network traffic, and block any suspicious connections. Firewalls can also be used to control access to certain services or websites, as well as restrict access to certain types of data.

Firewalls can also be used to monitor user activity on the network. By analyzing incoming and outgoing traffic, firewalls can detect suspicious activities, such as unauthorized access attempts or data theft.

Also known as an appliance firewall, this type of physical firewall is a dedicated device that is installed between a private network and the public Internet. It is designed to inspect and filter all incoming and outgoing traffic. This type of firewall is typically used to protect larger networks, such as corporate or government networks.

Fortinet FortiGate and Palo Alto Networks are both leading firewall vendors in the market. Both offer a wide range of firewall solutions for various use cases, from small businesses to large enterprises.

FortiGate is known for its high performance and scalability. FortiGate firewalls use a proprietary OS called FortiOS which allows for advanced security features such as Application Control, VPN, and intrusion prevention. FortiGate also offers a wide range of appliances for different size of organizations and use cases.

Palo Alto Networks, on the other hand, is known for its next-generation firewall capabilities. The company’s firewalls use a proprietary OS called PAN-OS which provides advanced security features such as application visibility, threat prevention, and URL filtering. Palo Alto Networks also offers a wide range of appliances and virtual firewalls for different size of organizations and use cases.

In terms of features, both FortiGate and Palo Alto Networks are comparable and offer similar functionality, but each has its own strengths. FortiGate is known for its high performance and scalability, while Palo Alto is known for its next-generation firewall capabilities. Ultimately, the choice between the two will depend on the specific needs of your organization and the features that are most important to you.

Would you like to know more about our IT services we offer?